Today is a Joyous Day! 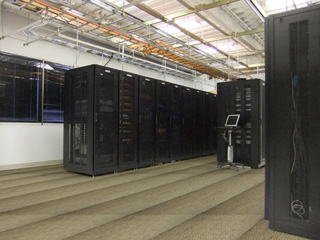 We have recarpeted our data center!

The old carpet was really ugly and decrepit, like someone raided grandma's house for old rugs and moved them here. Only decades of stains kept it from being faded. Also, the padding sucked, and racing chairs between the cages was becoming unreasonably dangerous.

Our new carpeting apparently comes from the land of short people who thought stripes would help make them look taller and slimmer. The color isn't exactly what we were looking for, but the effect is quite grand and our racks do look much taller. 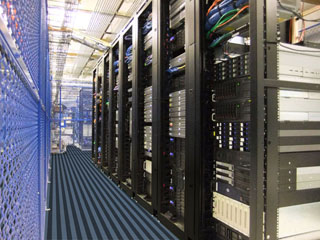 The old carpet was beginning to fall apart, especially in high traffic areas, and the padding had exceeded the manufacturer's recommended absolute maximum lifespan. The resulting reduction in pile height was causing a noticable increase in ambient resonance.

The new carpet uses a technology called HushWeave (licensed from a small 4 letter company in Sweden).

The reduced noise in the data center creates a relaxing environment for both the users of the data center and the servers themselves. This increases the lifespan of the storage subsystems by nearly eliminating the vibrations that affect the spindle wobble on high speed hard disk drives. A quiet/serene data center makes for well behaved servers.

This helps us achieve our goal of a datacenter based on the idea that good servers should be seen and not heard. 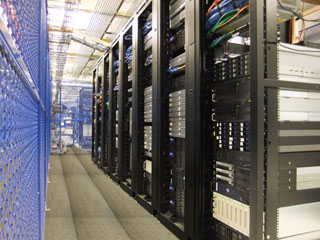 Our schedule for replacing the carpet was accelerated due to an approaching forced service contract expiration on our Roombas. The carpet pile was just getting to be too short for the Roombas to be efficient in their routes, and they would sometimes choke.

iRobot was consulted and they sent out a design engineer who suggested that we replace our aging carpet with something less than 40 years old. He also noted that it appeared to have been raided from his grandmother's house.

Redundant network, power, and HVAC were used during the renovation of our datacenter carpeting. This was because we were using full bolts of carpet (99 yards long, 12 feet wide) and we had to suspend the racks temporarily. 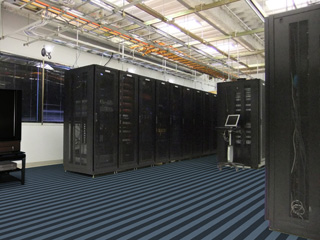 Security concerns with the visible wear pattern of the old carpet have also been addressed.

Wear patterns could allow black hat operators to figure out which racks of machines have the heaviest traffic, and therefore the largest Ethernet.

In contrast, the long, wide stripes of the new carpet allow us to estimate the height and dimension of each user in the data center for tracking with our new targeted individual recognition system.

This renovation makes our data center a truly world-class facility, but we're not standing still. We will be looking at repainting or possibly wallpapering the walls next, to make the environment even more server-friendly, supportive, and conducive to growth.